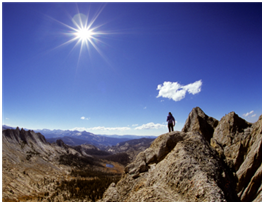 I have a great idea for a new reality adventure television series.

The basic premise is simple. Contestants are blindfolded and driven to a starting location on the side of a mountain. When the race begins, each contestant must find a path to the base of the mountain as quickly as possible. The blindfolds make it impossible for contestants to detect the contours and obstacles in the landscape.

When contestants are working alone, the strategies they can use are limited. If the terrain is smooth, like a rolling pasture, then contestants might find a successful path by taking small steps in several different directions, and then choosing the direction that leads downward. When the contestant feels that path starting to flatten out or trend upward, she knows it’s time to stop and choose a new downward direction. Repeating this process many times should lead each contestant to the bottom of the nearest valley, which depends on the starting location. The first one to the bottom wins!

To increase the difficulty, fences could be placed on the mountainside. Contestants could then be challenged to find a downward path that also stays within the fence line. If the fence line is really curvy, then the still-blindfolded contestants might get stuck in one of the curves with no way to move downward and no way to figure out whether they are at the lowest point in the landscape. The only hope of getting to an even lower point would be to start over from a different location.

For contestants with strong ankles, the competition could be held on mountain ranges with very rocky terrains. On this uneven landscape, small steps wouldn’t necessarily provide useful information. So contestants would need to use a different strategy to select a downward path. We could imagine several possible strategies, with most of these involving semi-random steps of various sizes.

Like most adventure reality series, this one could also be made into a team competition. Each blindfolded team member could be dropped off at a different location in the mountain range and provided with an altimeter and a GPS. Team members could communicate their elevations and locations to the team captain, who would then direct the movements of each player based solely on the collective information provided. Instead of finding the bottom of the nearest valley, the team’s goal would be to find the lowest point in the lowest valley within the entire mountain range – within the fence line.

Countless strategies could be used to systematically explore a mountain range with a team of blind-folded explorers, but none of these is guaranteed to find the absolute lowest point within the limited time allotted for a television program. So generally the team that finds the lowest relative point is declared the winner.

Numerous television executives have already rejected my “Race to the Bottom” reality series idea. Not melodramatic enough, they said. But I’ll keep trying until I’ve exhausted all the options. In the meantime, I’ll keep performing design optimization studies.