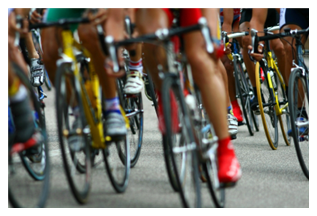 I am currently training to compete in my first sprint triathlon race. Well, compete may be an exaggeration, and there won’t be much sprinting. But I do hope to cross the finish line before the sun sets.

If you are unfamiliar with the sport, a sprint triathlon is a race with three components. Participants swim about one-half mile in a lake, then ride a bike about 12 miles along a marked road course, and finally run 3.1 miles to reach the finish line.

To an athlete, this race sounds like a fun challenge. To an engineer, it is a fascinating multi-objective optimization problem.

Clearly, the primary objective is to cross the finish line in the shortest time possible. But it’s still important to remember that the total race time is the sum of the times necessary to complete three very different parts of the race – the swim, the bike and the run.

In optimization, this is often referred to as a summed objective problem. It is a good way to handle optimization problems containing multiple objectives that do not directly compete with one another. In other words, improving the value of one objective does not inevitably worsen another one. For example, swimming faster does not necessarily make you run slower, so these two objectives can naturally be summed together when seeking an optimal race strategy.

However, non-competing objectives might still be strongly coupled. In a triathlon, if you spend too much energy swimming faster, then you won’t have enough energy remaining to bike or run at your best, resulting in a slower overall race time. Based on the athlete’s level of skill and fitness, there is an ideal swimming pace that preserves just enough energy to perform optimally in the bike and run portions of the race. Similar arguments can be made about the effect of the bicycling pace on the run performance.

Interactions also play a role in how we define the scope of our optimization problem. Due to lack of time or interest, many triathletes focus their training on just one or two of the triathlon events, paying only minimal attention to the other one(s). This short-sighted approach usually leads to poor overall performance in the race. As already noted, improving performance in one or two events does not guarantee any improvement at all in the overall race time.

To find a truly optimal strategy, you must optimize the interactions among the components. Any improvement to the parts must be considered in light of its contribution to the whole.

The same is true for optimization problems within engineering, science and business. We often focus our attention on improving a part within a system, perhaps the part that is failing or is most expensive. In doing so, we ignore the interactions among the various parts in the system, and we severely limit the scope and the potential benefits of the optimization search process.

Consider the common goals of reducing mass or cost. It may be that by adding mass or cost to a given component (blasphemy!), we can then reduce the mass or cost in other components to achieve an overall system level improvement. Isn’t this the ultimate goal, after all? But when we focus on individual parts and ignore their interactions, these opportunities remain hidden.

So yes, I do plan to swim slowly during my triathlon race in order to improve my overall time. That’s my story, and I’m sticking to it.