Sometimes we have more than one output response that needs to be either minimized or maximized, so we need some way to encourage multiple responses to be as small as possible or as large as possible at the same time. These are called multi-objective design exploration problems.

One of the most common reasons for using multiple objectives is to assess the trade-off between two or more competing responses. In other words, what is the cost to improve one response in terms of making another response worse?

For example, in a structural design we may want to minimize both the mass and the cost of the structure. If reducing the mass requires the use of more expensive materials or manufacturing processes, then these two objectives compete with one another. In this case, we would like to know how much additional cost is required to reduce mass a desired amount, or what increase in mass must be allowed to reach our cost target.

Our discussion here will focus on problems with two objectives because that is the most common type of multi-objective problem, and it’s easier to visualize the solutions with only two objectives. It is possible to have more than two objectives, though.

Recall that in a single objective design exploration the optimization search converges toward a single point, the optimal design. But in a multi-objective Pareto search, our goal is to find the relationship or trade-off among the objectives. The result of a Pareto optimization search is a curve made up of optimal design points (see Figure 1). We call this a Pareto front. If we have more than two objectives, then the Pareto front becomes a surface.

In Figure 1, the red curve is a Pareto front that represents the trade-off among mass and cost for a structural design. This curve does not tell us which design is best for our current application. In fact, all of the design points on the Pareto curve are optimal for some specific trade-off between mass and cost. This information is useful in helping the design team to choose a design that best meets its goals. 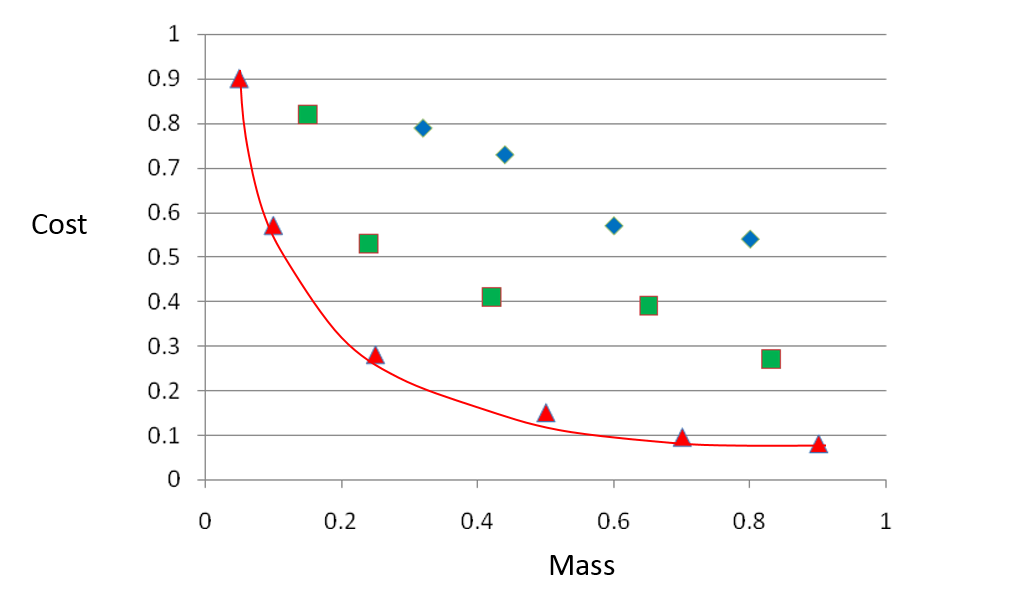 Figure 1. Typical results of a multi-objective optimization study. The design points represented by red triangles are the best set of designs found in the optimization search. These represent the Pareto front. The green squares and blue triangles represent other non-optimal designs.

Referring to Figure 1, let’s say that your current design has a mass of about 0.7 (ignoring units, for now). If there is a strong desire to reduce mass even further, then we can see from the Pareto front that the increase in cost is very small for an incremental decrease in mass. Since it won’t cost much to decrease the mass, it is probably an easy decision to do so.

On the other hand, let’s say that your current design mass is approximately 0.1. Any further decrease in mass is now going to have a large cost associated with it. Deciding whether that reduction in mass is worth the added cost might be difficult. But at least you now have the data that helps you to understand the effects of this decision.

Using Constraints to Limit the Range of the Pareto Front

Let’s consider another example. We wish to design an efficient I-beam structure with a tip load as shown in Figure 2. Our goals are to minimize mass and minimize stress. There is a constraint on the tip deflection, and the design variables are the four shape parameters H, h1, b1 and b2.

Figure 2. A cantilevered I-beam with a tip load. Four shape parameters (design variables) define the beam’s cross section: H, h1, b1 and b2.

The primary role of material in a structure is to carry stress. For an efficient design, reducing mass will cause the stress to increase. So these two objectives are clearly competing in this design. We can determine the trade-off between mass and stress by performing a Pareto optimization search. Figure 3 contains the Pareto plot based on the solution to this problem. 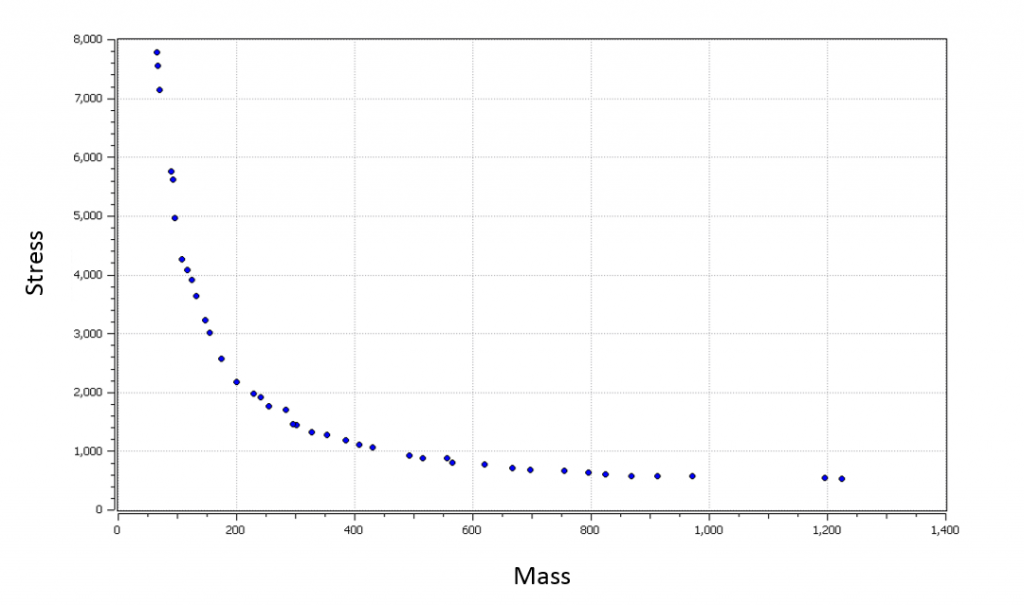 Figure 3. The Pareto front resulting from the minimization of mass and stress in an I-beam.

Note that the goal of a Pareto optimization search is to identify the entire Pareto front, which may extend over a wide range of the objectives. At the same time, the algorithm tries to spread out the design points as evenly as possible on the Pareto front.

In most cases though, we only care about a certain range of the Pareto front. For example, in the Pareto front shown in Figure 3, it is not likely that we care about designs that range in mass from 100 to 1200 units of mass. Likewise, we are probably not interested in designs that range in stress between 500 and 8,000 units of stress. We should know much more about our expected design performance than this.

If so, then we have wasted a lot of computational time trying to find designs at the extremes of the Pareto front that we have no interest in. It would be much better to focus our search on the part of the design space that is of interest to us.

We can do this by adding constraints that limit the acceptable range of the objectives. This means that we have to define some responses as both an objective and a constraint. This is perfectly acceptable. In fact, it is highly recommended when performing multi-objective optimization.

As shown in Figure 4, the previous study was rerun with new constraints on mass (≤ 400) and stress (≤ 4000). This new study resulted in a more focused search in reasonable parts of the design space. We also obtained more design points in the part of the Pareto front that is of most interest to us. 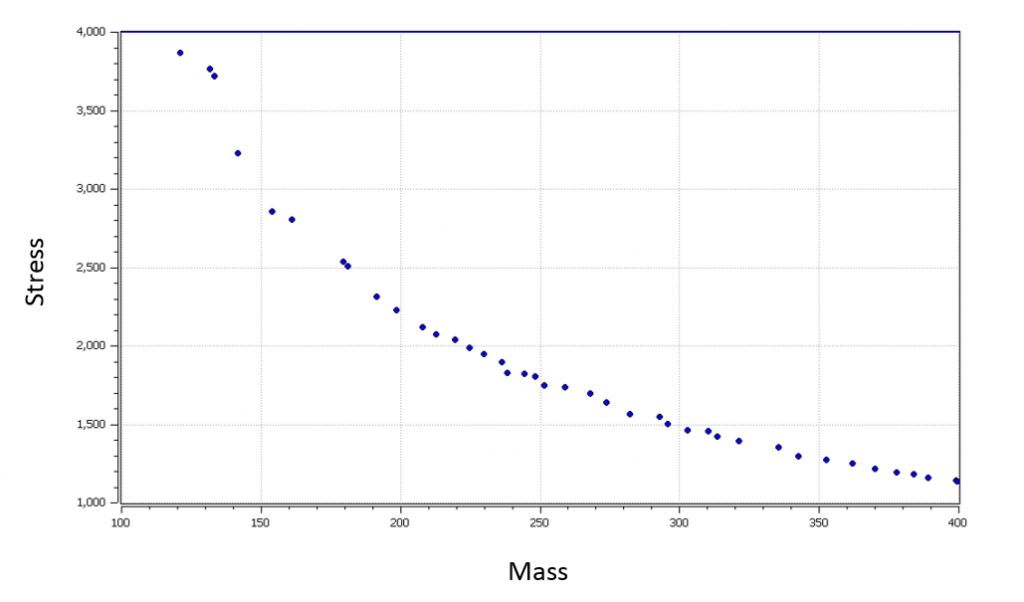 Figure 4. Using constraints to reduce the range of the objectives in a Pareto search.

However, reducing the range of the objectives in the Pareto optimization study by using constraints (as discussed above) often has the effect of focusing the search within a smaller region of the design space. In many cases, this can decrease the cost of the multi-objective search, which makes finding a reduced Pareto front more affordable.

Considering the high value of knowing the trade-offs among your design goals within the expected performance ranges, this approach should be considered often.

We hope this tip helps you to discover better designs, faster.